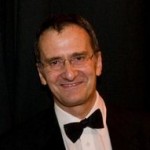 Born in 1959, Andrew Winter came from a musical family. His father played the piano and Andrew can remember as a young child lying awake on many nights listening to him play Mozart, Beethoven and Grieg. While those formative years were crucial in his musical development, Andrew also clearly remembers, at the age of six, watching Yehudi Menuhin perform on TV and immediately asking his parents if he could learn to play the violin. He began studying the instrument at the age of seven with Winifred Genin from the Liverpool Phil and at the age of thirteen won a local education authority scholarship entitling him to free lessons with her for the next five years.

Andrew was always actively involved in school musical activities and led the school orchestras as well as performing in many chamber ensembles. He was appointed leader of the Liverpool Schools Symphony Orchestra and led that group for a couple of years until leaving school. Already having been a keen member of the Merseyside Youth Orchestra for many years, he was soon appointed its leader and spent many more happy years with the orchestra until leaving to take up work as a junior doctor.

For many years Andrew has played in and led a number of other local orchestras. He is the proud owner of number of violins, the most beautiful of which is by the Parisian violin maker Jean-Baptiste Vuillaume and modelled on a Stradivarius.

In addition to being a busy General Practitioner, Andrew is a Consultant Dermatologist running a hospital department in a locum capacity. However, when not working or playing the violin he enjoys flying aeroplanes and scuba diving!