The Wirral Award confers civic recognition for outstanding achievement and distinguished service to the Borough.

It was presented to Edward on 11th March 2015 by the Lord Mayor of Wirral, Mr Steve Foulkes during a ceremony in Wallasey Town Hall. 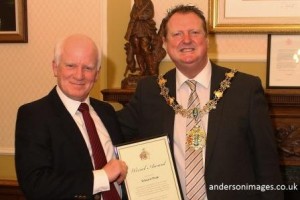 Edward is a Wirralian and a professional musician but with many other strings to his bow.

From a child he has both helped and entertained local people to enjoy and benefit from music, initially as a pianist playing for ballet classes, later running bands for English & Scottish country dance groups. As a hugely talented teenager he became Musical Director for local Scout Gang Shows, composing and arranging musical scores for the theatre and helping others with musical studies. From 18 he took his conducting skills and double bass playing to the Royal Northern College of Music and then to the Royal Liverpool Philharmonic Orchestra but continued teaching and bringing live music to audiences all over Wirral and Merseyside.

Retirement from the RLPO after 30 years has not curtailed his drive and enthusiasm: he is now Musical Director for Orchestra dell’Arte and for many tailor-made “designer” concerts in the North-West – all with the theme of bringing enjoyment to the public and achieving the highest standards of performance from the players.

He has always written and arranged music for special occasions and celebrations and is well known as a speaker for local social groups. He helped to found Heswall Arts Festival in 2010 and is the Festival Music Advisor.

Alongside all of this he has brought his skills and lifelong interest in Film to the local Movie and Cine groups as contributor and competition judge; he gives talks on the world of Film and Radio having done many live broadcasts for BBC Radio Merseyside; he also holds a degree in Biology.

If that wasn’t enough for Wirral he has spent many years teaching RYA Sailing and Powerboat skills at West Kirby and commanding the Naval section of the CCF in Calday School thereby helping young people with discipline, drive and achievements for their CV as they move through their teenage years into University or jobs. He is an active member of Calday Bowmen participating and encouraging others in the sport of Archery. Through Festival Films he advises and coaches those needing University and Post-Graduate interview training.

His many years of service to the people of Wirral have been justifiably acknowledged by the receipt of this Award. more about Edward