At the end on the nineteenth and the beginning of the twentieth century, salon music was a phenomenon that could be found all over Europe.  The growth of coffee-house culture served as the ideal location for the seemingly endless supply of good-quality light music that appeared at this time.

From its earliest days, salon music was originally chiefly played by a solo piano – mainly arrangements of orchestral works and operatic excerpts as well as newly-composed pieces. Works such as Rubenstein’s Melodie in F and waltzes and polkas by the Strauss family would have been typical fare, but composers like Paul Linke and Robert Stolz soon became well-known in their own right for producing works specifically for this medium.

Before long, perhaps a violin and a cello, or in the larger establishments some woodwind instruments would be added to the solo piano.  The well-to-do coffee houses of major cities might even stretch to a small orchestra.

There was now a great demand for special arrangements of popular classics and current favourites for what had now become the salon orchestra.  Music publishers all over Europe produced sets of parts that could be played by any ensemble from a trio to a full orchestra.

The inter-war years were a particularly rich time for this sort of music, with a huge increase in the numbers of musicians employed in this sort of work.

Inevitably, much of the printed material from those days has been lost in the chaos of war and in the changes of popular culture since those days.  However, a large quantity of salon music has survived in vaults, cupboards and piano stools! 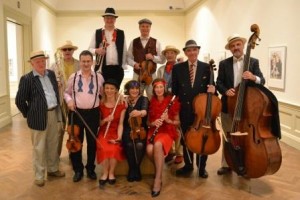 The Tivoli Orchestra is an ensemble drawn from the Orchestra dell’Arte specifically to recreate the sound of an authentic salon ensemble.  All the music played by the Tivoli Orchestra is from the golden days of the genre – indeed most of the printed parts are originals, some in a frail condition, but still usable after much use and then storage for nearly a century.

The Tivoli Orchestra performed a programme of salon favourites, ensemble and solo pieces, for a delighted audience at the Williamson Art Gallery on Sunday 6 July 2014.

Plans are in place to make a commercial recording of a selection of salon music, release date to be confirmed – watch this space.