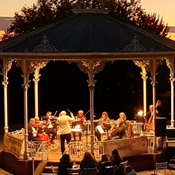 As things begin to get back to ‘normal’ the ODA is looking at a range of possibilities to allow its players to bring you live music once more. A few small steps have been taken already. On 30th August a small string chamber orchestra played in the beautiful setting of the Isla Gladstone Conservatory in Stanley Park, Liverpool while violinists Andrew Winter and Daniel Axworthy will be performing Bach and Vivaldi in Arley Hall Gardens in Cheshire on 5th September from 1.30pm.

One step at a time …

As you will realise we can’t perform live for you at present as we have reluctantly had to suspend our concert programme. Do keep checking the website where we will keep you updated with all our future events.

In the meantime, here are some of our great recordings for you to hear, including classical, salon and music hall performances.

L’Orchestra dell’Arte isn’t playing at the moment but they will be uploading regularly to their YouTube channel!

This orchestra went above and beyond in providing opportunities for me as a young musician to gain experience of playing at semi-professional level. I owe them a huge amount and hope to pass on the same lessons, sense of community and overwhelming support for young people that they taught me.

In early March 2020, as part of our continuing exchange programme, ODA conductor Edward Peak and tenor soloist Joseph Buckmaster travelled to the North German city of Hannover to perform with the Hannover Kammerorchester. With a programme including Schubert’s Symphony No 2 and a selection of popular opera arias performances were given in the city’s beautiful Christuskirche. Following an afternoon event before 150 school children the formal concert was delivered in the evening before a packed and appreciative house.

The ODA will be welcoming Hannover Kammerorchester conductor Hans Christian Euler to St George’s Hall on 20th September for the return leg of the exchange.

To celebrate the 10th anniversary of its formation Orchestra dell’Arte is delighted to announce its most ambitious Sunday Matinée season to date as orchestra-in-residence at St George’s Hall.

Under the direction of conductor, Edward Peak, the orchestra is proud to present performances by world-class soloists Raphael Wallfisch (cello) and Jack Liebeck (violin), along with a staged performance of Puccini’s iconic opera, Madama Butterfly, performed by soloists from Welsh National Opera.

Furthermore, following successful events in 2017 and 2018, plans are also afoot to present another UNESCO Soloist Exchange Concert as part of the Season’s celebrations.

A WARM WELCOME FOR THE LORD MAYOR OF LIVERPOOL 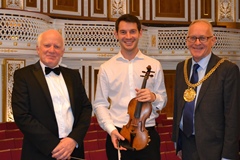 On 26th November the ODA had the pleasure of the company of the Lord Mayor of Liverpool, Councillor Malcolm Kennedy at the Sunday Matinée concert at St George’s Hall. He and the Lady Mayoress enjoyed a programme of music by Brahms, Dvorak and Smetana topped off with Beethoven’s Violin Concerto performed by Dewi Tudor Jones. Councillor Kennedy’s first encounter 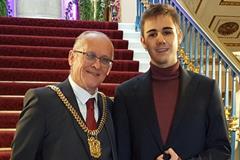 with the ODA was in September when he kindly received our piano soloist, Pietro Fresa, and his family at the Town Hall along with Edward Peak, the orchestra’s conductor and artistic director and Valerie Warr, the orchestra’s manager, giving them a much-appreciated personalised guided tour.

September’s soloist at St George’s Hall, Italian pianist Pietro Fresa, is in the news again. He has already achieved much by way of awards in his youthful career but has recently, within the space of 24 hours, won the Luigi Magone prize at the Conservatory of Bologna, gaining him a substantial scholarship but even more excitingly was selected by the Maggio Musicale Fiorentino to have an internship at the prestigious Moscow Tchaikovsky Conservatory. Pietro made many new friends during his short stay in Liverpool and they are delighted to send him their best wishes and congratulations! What next?

We are immensely proud to announce that ODA Manager, Valerie Warr has been elected to Fellowship of the Royal Society of Arts and offer her our enthusiastic congratulations. read more

ODA Artistic Director Edward Peak has been honoured for his services to the Wirral community at a ceremony at Wallasey Town Hall. Edward has a wide range of talents and interests and many have been employed in the service of the people of Wirral. This well-deserved honour was bestowed on him by the Lord Mayor of Wirral, Steve Foulkes, at a dinner held on 11th March. Read on to to learn more about Edward’s many contributions. read more